the delights of Stepmotherhood 4 :Femme fatale 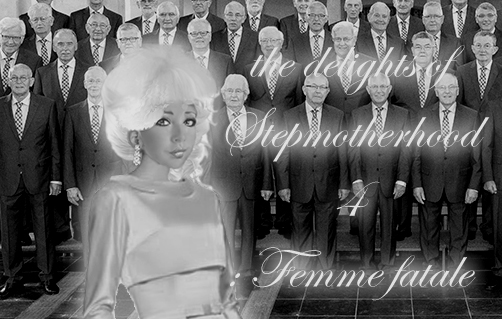 It was when Harvey and 'his conquest' were about to leave us ladies to ourselves, as I had given the gentleman permission to take Joyce for a ride in his new automobile before returning him home in time for dinner, that I saw it. 'It', was me realising how perfect our little lady had become over this relative short period. Without  me fully realising it our darling seemed to have picked up on several delightful affectations and mannerisms on her own. Only a week ago I had already seen him manipulatively pretending to be unsteady in his 5 inch heels and timidly accepting the supporting arm of his 'date'. He successfully pulled off the same charade this time, feigning utter girlish fragility and helplessnes whilst bashfully looking up at his manly suitor, making the enamoured elderly Casanova protectively slip his arm around 'his lady' to support the delicate little thing. All this was accompanied by coquettish little gestures, fluttering lashes and adjusting strains of hair peeping out from under the fabulous 'Dolce&Gabbana' silk headscarf our darling had decided to wear to protect his exquisite new hairdo during the ride and simply to show off. Was Joyce 'playing' him? It was just too good to be accidental, it looked very much like our darling perfectly understood what he/she was doing to the 'bewitched' older gentleman. In fact Joyce seemed at that point to have become an active and seemingly even quite willing participant in my little schemes. Developments that were still a bit unexpected but I think I am really starting to like our little lady. With some help he/she may actually have the makings of a deliciously manipulative little bitch, warming a wicked stepmother's heart.....
I may have underestimated the curiously twisted mind of a young transvestite and  I could very well have inadvertently found myself a 'partner in crime' where I had expected a 'victim'. Sometimes I tend to forget that only a short time ago these girlyboys had actually been oversexed adolescents who were very conscious of the strong erotic feelings girls and women could awaken in boys and men. It was partly that which gives the young transvestite an advantage over real girls his age who still have discover their powers, often by trial and error. Most of these initially heterosexually motivated boys had got hooked partly through fancying their own 'pretend-girl in the mirror' and said pretend-girl had been practicing seductive poses and affectations on him/herself since the very beginning. They knew very well how a lady crossing her nylon encased legs with their exquisite footwear could drive a boy/man crazy, even when it's now their own impossibly high-heeled and stockinged legs doing the job of mercilessly teasing their manly admirers. A pretend-girl has a far better starting point when it comes to 'reading' a suitor.
So when I watched our lovely couple leaving the establishment with Joyce dependently clinging to her beau's arm and the ladies praising me for my delightful little demonstration, I was already thinking of the delicious possibilities the new situation could offer.

Later, when a slightly disheveled Harvey delivered an almost impish looking Joyce home in time for dinner, I once again noticed how my adorable stepson had caused a member of the 'opposite' gender to have a little 'accident' as the gentleman hadn't been able to hide a clearly visible wet patch in his pants.
Of course my original plan to marry my little lady off to a depraved gentleman like him was put on hold now our 'innocent' young miss seemed to have demoted him to the 'very lucky victim' role, whilst at least partly becoming the perpetrator him/herself. I still want to see Joyce as a beautiful bride but the game seems to be going in a slightly different direction now.
I'm utterly delighted about Joyce's progress, soon I will be fine-tuning her obvious natural talent for picking up delicious feminine foibles like amused contempt, merciless taunting, sublimated frailty and other 'tricks of the trade'. The trade of being an impossibly vain, manipulative and spoiled upper class brat, that is. It's just all going to be so beautifully twisted and wrong.
Obviously there would still be a lot to learn for a young femme fatale in the making but the basics seemed to all be there.

The day after stepmother had taken me to lunch with her odd ladyfriends, one of these ladies appeared at the house to help me take my deportment skills to the next level. This meant me learning to walk as elegantly and ladylike as possible in my highest heels and tightest skirt whilst at the same time trying to keep that feminine wiggle in my tush. It had to be perfect, the way I held and moved my hands and arms, the way I held my purse, my general posture, everything.... Mrs. Arthuro, who had actually trained runway models in the past, was very strict and the ladies had me practice until I did it exactly the way they wanted. By then I was exhausted and my feet were hurting but the final test was still to come. Mrs. Arthuro decided that it would be a wonderful idea to make me walk her little pooch up and down the lane where we lived looking like a fifties moviestar and stepmother agreed it was a perfect finale to the day. It was a nice, quiet and affluent neighbourhood so there wasn't much real danger but wealthy people were just as nosey as others so I was still slightly apprehensive about drawing this much attention to myself on the street where people had actually known me as Josh. And drawing attention was probably inevitable as I was sure that stepmother had already carefully selected an extremely glamorous outfit for me to wear.
After dinner, in the early evening, my little adventure was to take place as at such an hour it would be relatively quiet and a young lady walking her darling little dog wouldn't look too out of place. Luckily stepmother had kept my get-up quite sedate. The skirt suit with the fox fur collar itself looked almost like something a 'lady' could be wearing to church. That is until one notices that the skirt was just a bit too figure-hugging and the jacket a bit too well tailored. I only later saw the label indcating that it was actually vintage Versace. Underneath I was wearing a darling satin a-cup push-up bra, that made the small fleshy mounds on my chest look like actual little titties, accompanied by a tight 'Kiss me deadly' waist cincher with 6 suspenders holding a gorgeous pair of Cervin fully fashioned nylon stockings. The black patent 5 inch+ pumps had a snakeskin pattern and were definitely not the churchgoing type. As usual I was perfectly made up and I had made an effort with my new hairdo. The ladies had still argued wether I should wear the Dolce&Gabbana headscarf or not but in the end the answer was yes because it was soooo deliciously 'Hollywood chique'....
So at 7.30 that evening the ladies virtually shoved me out the door with little Coco on a pink leather leash attached to a rhinestone collar. To be completely honest my memories of the excursion weren't very detailed as I had slipped in something like a trance that made the adventure feel almost like I was dreaming. Not much dramatic happened as I did my best to promenade down the lane as ladylike as I could whilst trying to look completely aloof and slightly indifferent to the world outside my direct view. Al seemed to go down rather uneventful and even the posh ladies from nr. 34, who were the kind of people who believed 'class' meant wearing wellingtons, plaid skirts and driving a rangerover just gave me a disapproving but uninterested look when their Alsatian showed too much interest in little Coco. Nothing happened until I came to the house of mr. Warren the bank manager who was just leaving the house to walk his beloved dachshund. Mr Warren was known to us youngsters as a stern and rather formal gentleman who wasn't very people-friendly. Which was probably an asset when your job involves refusing people loans. When we almost bumped into each other and our doggies got acquainted the usually grumpy gentleman 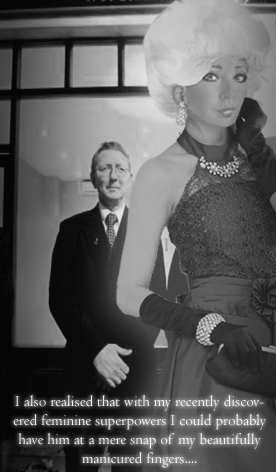 greeted me with a polite "Ma'am" definitely looking just that tiny bit more benign than usual when we both resumed our walk. It had only be a few seconds but for some reason I had never before realised what an attractive man this stern bank manager actually was and just like when I was first introduced to Harvey I actually felt a shiver going through me. It wasn't like the two gentlemen resembled each other in any way, Harvey being a chubby teddybear whilst Mr. Warren was a very tall almost gangly man, who in his somber black suits could very well have played the role of the creepy undertaker in a cheap horror movie. I just couldn't help it but I wanted him to do all kinds of terribly naughty things with me.... I also realised that with my recently discovered feminine superpowers I could probably have him at a mere snap of my beautifully manicured fingers....

I noticed that contrary to my google settings, not everyone seems to be able to comment. In those cases dont hesitate to complain to Google. I love comments and i have no real difficulties with anonymity. The wish to stay anonymous just comes with the territory.

....The true Vamp-lady looks at the world with an air of 'Amused Contempt'....

miss Zaskia
Older, once fairly extravagant and glamorous transvestite from Rotterdam in the Netherlands. With age I've gotten more and more comfortable in the role of the evil old witch(lol). p.s.I'm also quite mad......And I still want that mink coat!.....And some feeble elderly Millionaire to take me away from all this.....

a different perspective- my Christeen forgeries

The Georgina posts started as a spin-off from my Christeen forgeries but developed a life of their own as I'm just too good to be just an imitator for the rest of my life. Here is the whole bunch from the beginning.

a proud mother and her "former" son 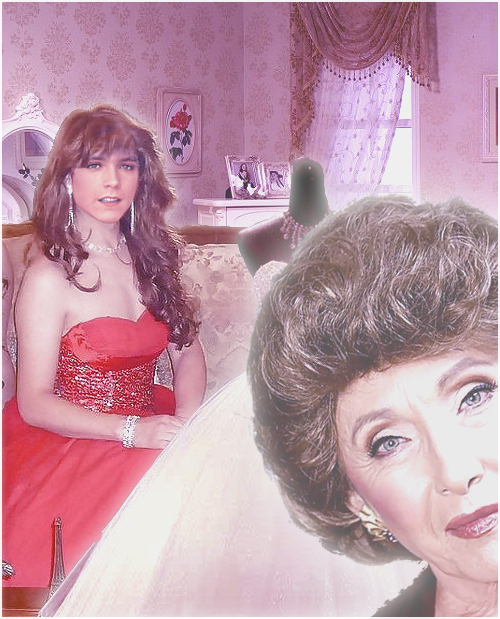 As I'm not a complete egomaniac and I have my personal favourites too, I do now and again have guest artists on here. Check 'em out, there is some interesting stuff there.

The Joy of being Someone Else

How transvestism isn't always about being yourself. When looking back and having gained some understanding of my motives in these matter... 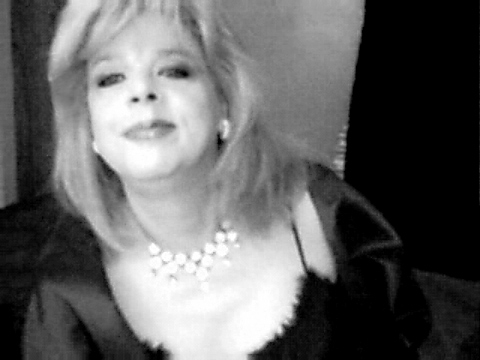 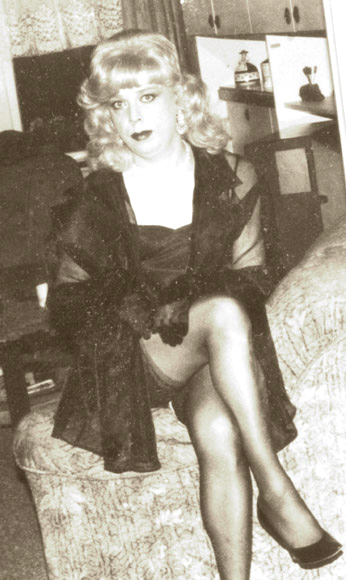 A touch of 'Drag' 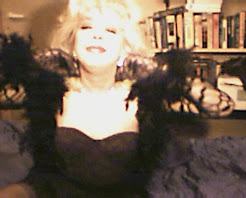 Reluctant at first.......but so willing to please now.. 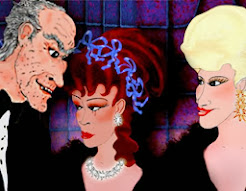 Illustrated short nasty story.Co-production between me and Peggy Sue Flowers.

A gurl needs practice(lots of it) 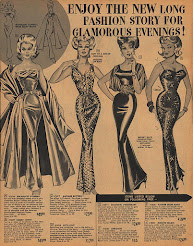 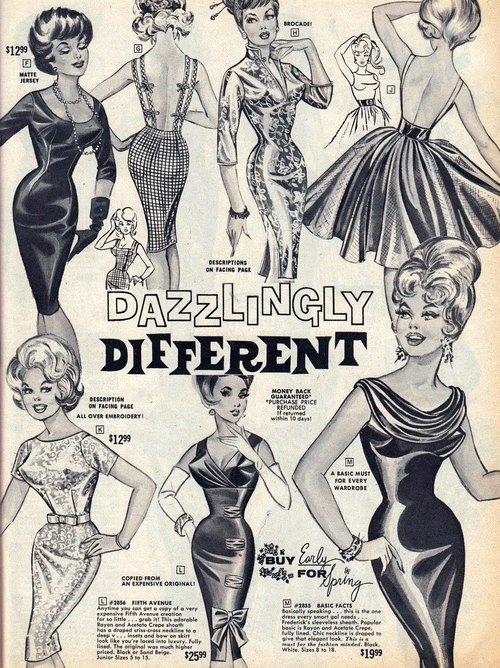